The Hay is in the Barn

So it’s June and the countdown is on. I returned home from the Cabot Trail Relay and opened up my calendar on that Monday morning with a ballpark idea of how many days I have left before my July 3 departure.

When I saw only 5 weeks, 4 weekend long runs, my primary emotion was “oh Sh#t.” I know that that isn’t a real emotion. But it’s the only way to describe how I felt.

At Cabot Trail Relay, I proclaimed that I would be taking a 4 day break. “I need to rest and be recovered more than I need to run” I said. But on Monday morning, what my brain needed was to run. 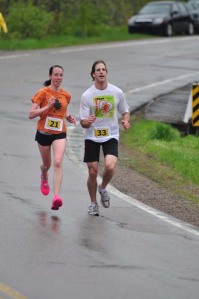 I took 2 days off and ran on Tuesday with Mike. We both felt pretty good post-Cabot. Mike, post-smokin’ Smokey Mountain; me post well-executed race on leg 1 (finally!). See results here.

We stopped in briefly to say hi to coach Cliff but he was busy in a buzz managing many different runners’ different workouts.

My anxiety about my 5 remaining weeks mounted.

On Tuesday, I called Cliff on the phone. “Do you have some time?” I asked. “All the time you need,” he says. Kindest man in the world. We chatted until we had a plan and until I felt less anxious.

Here is our plan for my last 30 days:

Mileage:
We’ll be careful with my mileage because I need to balance running with staying rested and healthy. Between 65-80km per week, no more.

Days per week:
Cliff has requested that I run just 5 days per week. I’m more comfortable when I’m running 6 days per week. However, when one of my training partners “disobeys” Cliff, I always tease him about his delusion that he is smarter than Cliff. So here I am in a  corner, where I pretty much have to follow my own advice! So I’ll obey Cliff’s 5 day cap. This means that my shortest runs will be 10kms.

For my last 2 long runs, I’ll do back to back runs of 20km on Saturday and Sunday. So forth named the 20/20 plan by Mike who believes himself to be quite visionary.

Remember:
Aside from helping me set up my final training weeks, Cliff reminded me of some important things. He told me to remember that my body has been under stress since November. I have months of training on my legs. I don’t need to do anything special in these finals weeks to prepare for Gambia. I am already prepared.

I think Cliff is nervous that I’m going to go out and start running like a maniac and do something crazy like 25km per day. I won’t do that because I understand that this would harm my preparation, not enhance it. As they say, “the hay is in the barn.”

As Cliff and I were wrapping up our conversation, he said something really wise:

“Erin, it’s already done” he said. “The commitment is made. You are going to do it and be fine. Stop worrying. Get yourself there rested” 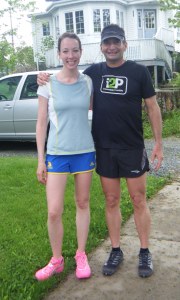 This week, I also got to spend an entire day with Ray Zahab, accomplished Canadian ultramarathoner and one of my running heroes.

If you’re not a runner, maybe you don’t understand how cool this is. It would be like hanging out with Sidney Crosby if you are a hockey fan.

Ray has a ridiculously positive and encouraging aura and through sheer proximity to him, I began to feel more prepared. He also had lots of great advice for me. He shared his best estimation of how I would feel over my 17 running days and, like Cliff, encouraged me to be selfish, to sleep a lot and let my support team take care of me.

Ray also had super advice about running strategy while in Gambia. The Gambia’s latitude is 13°, really close to the equator (0°), meaning there isn’t a long sunrise or sunset period. Each day has just less than 13 hours of daylight. The sun pops into the sky around 6:45am and drops out of the sky at 7:30pm. If you are out on the road at 7:00pm with no flashlight, you’re in big trouble! Morning is when I’ll be trying to do most of my running as it’s coolest in the morning. It’s not much cooler at 4:00pm than 12:00pm.

I was thinking that I would try to run my 25km in a row beginning at 6:45am. Ray says this isn’t the best way to do it. He advises that I get up, run 20km. Eat lunch. Have a little nap. Then 2 hours later, run the last 5km. It’s not that I can’t handle 25km in a row. The last 5km as run #2 serves as active recovery for the next day. This is brilliant.

Ray left on Thursday evening and I walked away from our goodbye hug feeling much more confident.

That same evening, I got an email from Gambian running partner, Spider, who will be joining me for the last 130km.  It read “Don’t worry. Either huck or hack, we will make it.”  Not really sure what this means, other than we will make it! 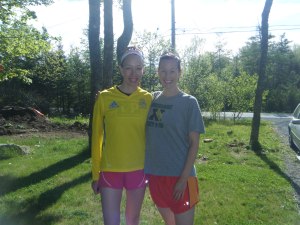 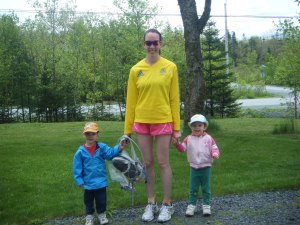 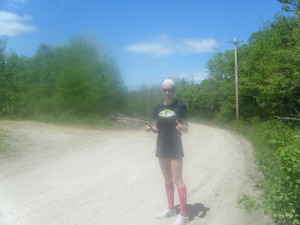 4 Responses to The Hay is in the Barn