The Love4Gambia team, featuring Halifax-based runner Jennifer Pasiciel and Gambian team Pa Modou Sarr,  Kebba Suso and Dodou “Spider” Bah hit the red soil road of The Gambia once again in June, 2013.  They crossed the country over 17 days, joined by many peer health educators, teacher coordinators and youth. The team victoriously reached the Atlantic Ocean in Banjul on July 4, 2013, raising over $9000 in support of NSGA‘s life-saving health programs for children and youth.  Read more from Jennifer here. 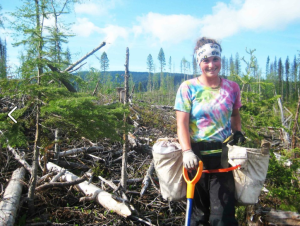 Jennifer began running on the high school cross country team at the
age of 12 and has developed an active lifestyle of hiking, running, and tree-planting since then. Over the past decade she has completed six marathons, hiked Kilimanjaro two times, and planted over half a million trees in British Columbia and Nova Scotia. She is also the race director of Run Without Borders, a non-profit, charity running race organized in Calgary, Edmonton, and Halifax.

Jennifer’s interest and passion for Africa began with a few courses in
African Studies, followed by two trips to Eastern Africa- one to travel and
volunteer in Tanzania, Kenya, Rwanda, and Uganda, and another to conduct research on malarial diagnostic tests in rural Tanzania. It was here that she developed an interest in health promotion, education, and prevention at the global level. Jennifer is currently completing her Masters degree in health promotion at Dalhousie University, doing research on rural women’s health and the social determinants of health.